Everyone should be quick to listen, slow to speak.    James 1:19 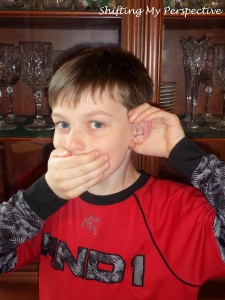 There was another great gem that came out of the conversation I had a week ago with another mom. She said her son also told her that until he met Mason, he’d never found anyone who understood how he thought. His mom had responded to him, “Mason must be a good listener.” Her son’s response was, “He sure is.”

This part of the conversation blew me away more than the first. The Mason I know is a steady stream of chatter, and a true entertainer while he’s at it. Not only can he stretch a two minute story into twenty-two minutes, but he adds voices, sound effects and movement to boot. He’s not the only one; all three of my kids never shut up!

It had gotten to the point where I was actually concerned. I was worried that my kids steamroll people, are too self-centered, and hog all the air so no one else ever gets to talk.

In fact, back in September, I put notes in their lunch boxes that asked, “What is something new I learned about someone today?” It was my reminder to them to ask their friends questions at lunch, to show an interest in others, and to draw others out.

Each night at dinner, I’d ask my kids what they had learned about their friends. Each night, they’d admit they hadn’t followed through. So I put the little paper prompts in zip lock bags (my lazy version of laminating them), and put them back in their lunch boxes. I’ve been doing so ever since.

Round about November, I got so fed up asking at dinner, only to be told they still hadn’t followed through, that I stopped asking. I assumed they were still too young to learn the art of conversation. So I let the issue drop.

I couldn’t blame them. I’m an adult and I still haven’t mastered the art of conversation yet. Instead, my greatest conversational skill is interrupting.

Obviously that’s a terrible skill to possess! I learned it as a kid growing up in a large family. The only way you were ever heard was by interrupting.Then you had to talk real loud and real fast before someone else interrupted you.

That terrible skill was further sharpened in college. After a crush on an actor led me to the theatre, I loved it so much, I decided to minor it. The theatre crowd then became my crowd. Trust me, when you hang out with a group of people who relish the limelight, interrupting is the only way you are heard.

Post-college, I justified my interrupting-itis by viewing it as a way of affirming and helping others. If someone was talking about something I had already experienced, I thought interrupting them to share my story was a way to make them feel less alone. Or maybe I had a resource or great advice to share that just couldn’t wait, for fear I’d forget.

However, once I had kids, I started meeting moms who were excellent conversationalists. It felt wonderful to be asked questions, and then to be given time to actually answer them. Better still was the feeling of being heard. Consequently, I’ve learned that being truly listened to is far more affirming and life giving than any commiserating or advice I could ever give.

I’m so proud of Mason for becoming a good listener at such a young age. By doing so, he has impacted his friend’s life in a very profound way. And I have no doubt that Mason will continue to bless the world as he hones his new gift.

Now I need to follow Mason’s lead. I often pray to the Holy Spirit to give me the right words to say when I’m in a difficult situation. Now my prayer will be one where I ask the Holy Spirit to take away my words, to actually shut me up, so I become “quick to listen, slow to speak.”

If you enjoyed reading this post, click here to vote for me on the Top Mommy Blog directory. You can vote as often as once a day. Thank you SO much!!!

8 thoughts on “The Gift of Truly Listening”